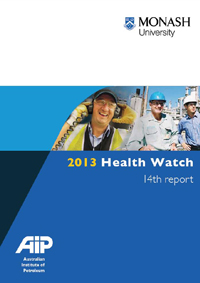 A Good Health Report Card for the Australian Petroleum Industry

A Good Health Report Card for the Australian Petroleum Industry

Health Watch is an independent, university-based research study which has been sponsored by AIP for the past 27 years. The Study follows 19,000 past and present employees of the petroleum industry. Although participation in Health Watch is voluntary, the employee participation rate has been outstanding – clearly demonstrating the value of the Study to employees.

The latest Report builds on the results of the preceding twelve reports in conclusively demonstrating that overall death rates from cancer in the petroleum industry workforce are significantly lower than in the general Australian population.

The latest Report shows that the overall cancer rate (cancers which have not resulted in death) is no different to that for other Australians. This is also the case with leukaemia, including acute non lymphatic leukaemia (ANLL) which has previously been associated with exposure to benzene. Importantly, there have been no new cases of ANLL identified since the last report. Dr Tilley said "the industry has taken substantial steps to reduce employee exposure to benzene and to petroleum products in general". Similarly, a greater awareness of the hazards of asbestos mean that working in the petroleum industry is unlikely to result in asbestos exposure. This is highlighted in the Report by the significantly low lung cancer rates in the petroleum industry, which means there can be few, if any, asbestos related lung cancers.

The latest Report shows a higher level of kidney cancer among tanker drivers than might be expected, but the risk is lower than that identified in the previous Health Watch report. However, the numbers are too small (only 13 cases) to draw any firm conclusion. Kidney cancer will continue to be monitored and be further analysed in the 14th Health Watch Report.

In terms of lifestyle factors influencing employee health, the latest Report shows that smoking has a powerful influence on ill health and mortality, and that quitting smoking noticeably reduces the risks.

The 13th Health Watch Report was undertaken by the Monash Centre for Occupational and Environmental Health, a leading international centre for epidemiological programs and collaborative research at Monash University.

Dr Tilley said "AIP is committed to supporting Health Watch because it is highly valued by the petroleum companies and their employees and is an internationally respected study. The Study also provides a robust scientific basis for the community to understand the health impacts of exposure to petroleum products. For these reasons, AIP and its member companies have decided to significantly expand the Health Watch Study from 2008."

The 13th Health Watch Report can be downloaded from https://www.aip.com.au/programs/health-watch.