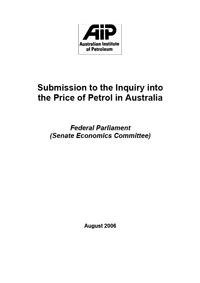 The Australian Institute of Petroleum (AIP) welcomes the tabling of the Senate Economics Committee Report into Petrol Prices in Australia.

“The central message in the Report is clearly that the Australian fuel market is a strongly competitive market, from which consumers benefit (page 51), particularly in terms of low prices”, said AIP Executive Director Dr John Tilley. “Australian fuel prices and fuel taxes are among the lowest in developed economies.”

“Australia has a very competitive and transparent market which provides price conscious consumers with extensive opportunities to minimise their fuel bills by taking advantage of price cycles and fuel discount offers. This is supported by the Committee’s Report”.

The Committee’s Report presents a comprehensive assessment of the key international and domestic factors influencing petrol prices in Australia and should assist the community, commentators and other interested parties to develop an improved understanding of these matters.

The Report clarifies a key area of misunderstanding – the influence of international market factors on the prices we pay for petrol in Australia. In particular, the Report emphasises (page 18) that: “the chief factors affecting petrol prices are outside the control of Australian oil companies, in particular:

At the domestic market level, the Report concludes (page 33) that: “whilst regulating the price of petrol would certainly lead to a flattening of the band in which the petrol prices fluctuates, this would most likely result in an overall increase in the price that consumers pay for petrol.”

AIP is concerned that claims by some members of the Committee about the supposed success of the WA FuelWatch program appear not to take adequate account of factors such as differential fuel qualities in the price comparisons, freight differentials between East and West Coast markets, the more recent entry of supermarkets into the WA fuel market, and the inappropriate comparison of individual service station prices. Those Committee members have also ignored the conclusions reached in relation to the FuelWatch program in the recent government petrol price inquiries in Queensland and the Northern Territory.

AIP is pleased that the Report clarifies the differences in fuel prices in rural and regional communities, particularly the role of limited demand in these areas and local area competition. The same factors have been identified in the other recent government petrol price inquiries.

In view of the highly competitive nature of the market, the transparent and visible prices to consumers along the entire supply chain, and the extensive analysis of prices and pricing contained in the variety of submissions to the inquiry, AIP agrees that no case has been demonstrated for further regulation of the Australian fuel market.

AIP was established in 1976 as a non-profit making industry association. AIP’s mission is to promote and assist in the development of a sustainable, internationally competitive petroleum products industry, operating efficiently, economically and safely, and in harmony with the environment and community standards. AIP member companies play various roles in each segment of the fuel supply chain. They include the four major (refiner/marketer) oil companies that operate all of the petroleum refineries in Australia and handle a large proportion of the wholesale fuel market. AIP member companies directly operate and control only a relatively limited part of the retail market.