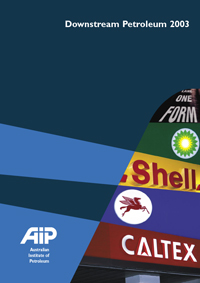 The Australian Institute of Petroleum today released Downstream Petroleum 2003, a concise overview of petroleum marketing and refining in Australia.

The report was launched at Parliament House by The Hon Ian Macfarlane, Minister for Industry, Tourism and Resources.

The newly appointed Chairman of AIP, Mr Dave Reeves, said, "The Australian downstream petroleum industry has faced a rapidly changing environment that has threatened its financial viability over the past 10 years."

"Recently, profitability has improved but the industry is notoriously cyclical and we need to lay a firm foundation now for a future that is inherently uncertain."

Downstream Petroleum 2003 summarises the issues confronting the industry and the trends in financial and business performance.

"The report demonstrates from the available evidence that manufacturing, distributing and selling petroleum products in Australia is a highly competitive activity," Mr Reeves said. "This efficiency underwrites the competitiveness of fuel intensive industries such as farming, mining, transport and construction."

"Intense competitive pressure at each level of the distribution chain means that Australians have for some time enjoyed among the lowest prices of petrol and diesel in the OECD."

"At the same time, Australian refineries are investing considerable capital to meet the future fuel standards as part of the Australian Government's cleaner fuels agenda. The industry will spend up to $2 billion to meet the standards that will deliver significant environmental benefits through cleaner urban air and facilitate the introduction of new, cleaner and more efficient engine technologies."

Downstream Petroleum 2003 provides a positive picture for the industry but it also highlights the continuing challenges from regional competition and domestic regulation.

Mr Reeves said, "While Singapore refining margins are currently strong, it is not certain that these margins will be sustained. The history of the Asian refining sector suggests that healthy refining margins lead to renewed interest in new capacity construction."

The rapid changes in the retail petroleum market further show that the current regulation of the industry is redundant.

"The changing structure of the retail petroleum market continues to highlight the absurdity of the Sites and Franchise Acts that discriminate against some market participants while offering no protection to independent service station operators. From the industry perspective, a more market realistic policy would see retail petroleum market issues dealt with under the general provisions of the Trade Practices Act and the Sites and Franchise Acts being repealed immediately," Mr Reeves said.

"Our new publication Downstream Petroleum 2003 is a timely addition to increase public awareness about the downstream petroleum industry. It emphasises the importance of the industry to Australia's economic prosperity and the challenges faced by the industry," Mr Reeves said.